Your voyage – then and now, share your journey. This is the theme of Day of the Seafarer 2022. That inspires Arnoud van den Bos to tell his Seafarer Journey. He immediately adds that one day is not enough. ‘If it were up to me, we would reflect every day on the crucial role of seafarers.’

Arnoud van den Bos: ‘If it were up to me, we wouldn’t spend one day but every day reflecting on the crucial role of seafarers’

At Arnoud van den Bos, JR Shipping’s Head Crewing Department since early 2022, a rich life lies between his first and last sea voyage. There has been a lot of changes, almost always improvements compared to the past, although he sometimes misses the ‘looser atmosphere’. That Arnoud went sailing was in the stars. He grew up in a family with sea legs with the port of IJmuiden as his backyard. His first trip is burned into his memory. 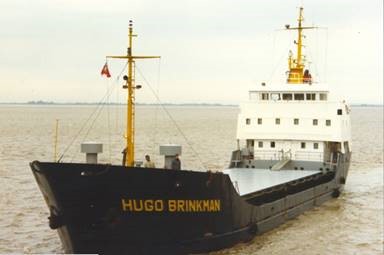 “My grandfather said: nice, such a diploma from the nautical school, but you’re only going to learn the trade. He was right. I made my first sea voyage in 1984, on a coaster, from Europoort to Sharpness. When boarding, I was shocked by the lack of space and privacy. I knew: now it’s serious, now I can’t get rid of it. But the team atmosphere was great and I was well initiated as a rookie. In all facets of life at sea and in the harbours. Also, in facets that they don’t tell anything about at school… ”

The importance of collegiality and tolerance

“My first voyage as captain always stays with me. At the age of 26, I was thrown in at the deep end. It was a bit of a swallow when an experienced colleague who would guide me through the lock did not show up. We were not yet at sea or bad weather broke loose and everything broke down. That’s where I really learned the trade. From two older sailors and a down-to-earth helmsman. There I discovered how important collegiality and tolerance are on board a ship. I still carry that out.”

“I have sailed for more than 35 years and then you see things change. Take the environmental rules. In my early years, everything went overboard. That would cost you dearly now. Everything is registered and administered. It is my only concern: that the administrative burden is sometimes at the expense of the real work. But the ‘old days’ may have been looser and more fun in a number of ways, he certainly wasn’t better!”

‘Waiting with a bag full of coins for one phone…’

“Shipping has become more professional. The technology is driving major improvements. Think of the communication with the home front. In my early years, you wrote letters or waited for hours with a bag full of coins at one phone. Now we are connected 24/7, also with the office.”

“The radar and radio made way for real-time data, so you can anticipate the current conditions much faster and better. Technology makes sailing extra exciting. The new generation is taking that on great. Young people are really interested in innovation and motivated to contribute to solutions for major issues such as the climate, safety, autonomous sailing and the fuel transition. That’s nice to see. ”

“During my last voyage, at the end of 2021 on container ship OOCL Rauma, I experienced the deep meaning of collegiality and tolerance on board a ship . The Russian invasion of Ukraine put a heavy burden on our Russian and Ukrainian crew members. Try to stay calm if you have just heard that your family in Western Ukraine is under enemy fire. ”

“Nevertheless, we managed to keep the conflict out. The credits for that go to the team. As a capital, you can do no more than do your utmost to include everyone in your decision-making. Open and honest. If your team then unanimously says ‘captain, we trust your decisions’, that does something to you. The lives of your crew members are suddenly in your hands. That gave my last trip a special dimension.”

“I have always opted for short sea shipping. Short shifts and the dynamics of ‘bouncing back and forth’. And I was always able to take steps at the right time that gave my career a boost. I like to pass that on to the new generation of seafarers: continue to develop and open yourself up to new opportunities. Active sailing is no longer necessary for me, but I would not want to miss my involvement with seafarers, as head crewing, for anything.”

“How crucial is the seafaring profession?

We all see what happens when ships carrying grain or oil cannot leave the port. Such a Day of the Seafarer is a great initiative, but especially in this day and age I would rather see us reflect every day on the work that our seafarers do, often under difficult circumstances, such as now. If I can contribute from my experience to the atmosphere at sea – an atmosphere of tolerance, equality and team spirit – then that will be a worthy conclusion to a wonderful career at sea.”